Crowns and Grillz: A brief history.

To start with the history of dental crowns and “Grillz”, we must first start with what dental crowns are. They are sometimes called dental “caps” and they are prosthetic devices that are put over broken teeth or weakened teeth to strengthen them against further decay. They are also used to improve their appearance. A shiny tooth, silver or gold certainly looks better than a rooting and decaying tooth. Crowns are used to stop weak teeth from further breaking, or fracturing. Sometimes they are used to cover up a root canal. They help keep the teeth functional and able to bite and chew. They can also be used to prevent improper alignment when you bite down.

Some time ago archaeologists discovered a guy who was buried in Giza in 2,500 B.C. He had two gold teeth in his mouth. They also already knew that back in those days people would wear dental jewelry as a status symbol, and often wore jade in their mouth as a type of “grill”. Sometimes they would insert pieces of actual gemstones directly into their teeth for a more natural and real look. When we look back and study the fashions of these times, the studies we have show that doing these types of things with your teeth was extremely popular and was “in” at the time. All the way up until the 1500’s in fact. Afterwards, people started to put gold into their mouth, and in the 1600’s this fashion trend exploded.

There were more Philippine skeletons found with basic gold tooth caps and entire gold tooth replacements. This was extremely popular among the political and ruling classes of the old world. It was almost always a symbol of power and status. If someone had gold teeth, you usually listened to what they told you to do or what they had to say.

The Etruscans were an extremely ancient civilization that was prominent in the area that is now known as Tuscany. These people would also use metals in their dental applications, including gold and silver. Luxury and wealth were an important thing to these people, and they displayed it prominently. The skeletons of these people revealed old and basic crowns on their teeth that were made from precious metals. They used to use artificial teeth, and they would hold them in place by wrapping them with gold wire and tying it onto the adjacent existing teeth. These examples are the first of their kind that we have found so far. No other civilizations before have anyone found that shows evidence of dental bridges up until that point. A great and fascinating discovery, it shows their genius and the willingness that they had to try to experiment with different techniques and materials. As such, the Etruscans are typically agreed upon in the archeological and scientific realms as the first civilization with cosmetic dentistry.

In the 1400’s, the Europeans would start to experiment with more modern dental practices that would pave the way for the machines and techniques that we employ today. In that tie though, they would carve dentures from bone or ivory, and would put these contraptions that they created in the mouths of their guinea pig patients who were desiring new teeth. A couple hundred years after that, in the 1700’s, HUMAN TEETH became a popular replacement for missing and broken teeth because they were natural in appearance and they worked better as teeth than any other fake teeth, probably because they were real human teeth. Eww. They figured out extremely fast however, that this was not a viable method for tooth replacement. The reason for this was that the body of the person that the new teeth were “installed” in would almost immediately begin to reject the foreign pieces of bone stuck into it. The teeth would then fall out and become useless, putting the patient right back in the same place they were left in before: toothless. Only, this time, they were out whatever money they had paid for the disgusting “other person tooth”. After 1770, the first porcelain dentures were invented and manufactured, and by the 1800’s they were the common standard for replacing teeth.

Of course, with the rise of the actual porcelain teeth came the rise of the porcelain crown as well. In 1903, a dentist name Charles Land introduced the first all porcelain jacket crown. He patented this in 1889 and it was the first modern version of the crown that we know and use today. His process was to take the broken tooth and rebuild it with a porcelain covering to make it appear new and unbroken again. It was amazingly effective for its time, and it was widely used until a better and stronger solution was invented in the 1950’s. This was the porcelain-fused-to-metal crown.

The way we fix teeth today is quite different from the way we used to do it.

Normally, crowns can be made from almost any dental material. Porcelain, gold, metal, silver, whatever. If your kid has broken a tooth, then you will probably need to visit a dental office immediately. Same goes with you, mister or miss adult. Do not let a broken tooth go untreated. It can cause you serious pain and more problems down the road, including an infection. This nee to be treated by a team of dental professionals who know exactly how to get that broken tooth and all its pieces out of your mouth without causing harm the rest of your beautiful pearly whites. The dentist will treat you or your child and will tell you how you can avoid dental emergencies in the future. Though if it is your child, it is most likely something obvious, like not chewing or biting down on hard things and breaking your teeth. Ha-ha. We’ve all seen it, had it happen to us, or had it happen to one of our kids. It is part of life and sometimes it happens. Sometimes someone can go their whole life without breaking a tooth, and some people will break 20 in their lifetime. There is no way to know for sure really. Just make sure to take are of it promptly and as safely as possible. Make sure you do not try to fix the problem or remove the tooth yourself as this can have dire consequences and can cause serious damage to your teeth or gums.

It is important to remind you that this is a cosmetic procedure sometimes, and if it is not needed, then we do not recommend you getting it. There have been no studies to prove that grills, crowns, or caps are harmful to teeth, but the American Dental Association warns that there is also nothing to suggest that they are safe for you either. Grills are just like anything else that you put on your, it is going to require special care. Same thing applies with new teeth. If you are considering a couple of gold teeth or a grill, consult with our expert team and decide if this is a safe health choice for you orally.

If you don’t have a grill and don’t want one, that is fine too! Just check in with us anyway to schedule your checkup. If you are like most adults, you probably haven’t even been to the dentist in a couple of years. You want to make sure you are getting bi-annual checkups if you can afford them! Your natural teeth without any metal on them are just as much of a fashion statement as a shiny big grill sticking out of your mouth. This way, you can make sure that your smile is communicating what you want it to, whether that is some blinged out options, or a more natural look.

If you really want a grill and there is no talking you out of it, then get the opinion of your local dentist and see what he thinks about it. If you pose no serious risk to your teeth by getting one, then by al means get one if your dentist thinks that it is going to be okay. We do know that grills are permanently attached to the teeth through the dental adhesive, and this can cause permanent damage to the teeth and its surrounding tissue. Just make sure you do your research, and really go into what getting them and having them would be like. Imagine what it would be like to eat with them, chew with them, all those things. Whether or not you may like the change and want to remove them, which is sure to be expensive as well. These are just some things to mull around in the ole noggin before pulling the trigger on your decision to get some Nelly Grillz. 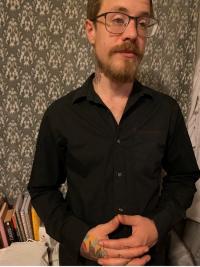 My name is Blake Congdon. I am 28 years old and have been all around the United States and other countries as well. Along the way I have picked up tons of experience and knowledge. I am a web designer and salesman, a consultant and lead generator. Recently I have been working on building websites, it is something I enjoy and am able to monetize. I have recently discovered that writing is a passion of mine and something that I also like to do. I live in Richmond, Virginia with my wife, close to my mother and my family, a short distance away so that spending time with them as they get older is much easier. I like a simple life, and do not overcomplicate things.

Some of the recent sites that I have been working on: